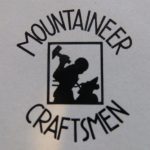 Authentic Arthurdale made Mountaineer Craftsman Furniture is identified by this logo which appears on the back or underside of the furniture pieces.

The Mountaineer Craftsmen’s Cooperative Association (MCCA) was formed by members of the American Friends Service Committee in 1931 in the coal camps around Morgantown, WV. Its goal was to help the unemployed by teaching them handicraft trades as a way to make money. An Arthurdale branch opened in 1934 and shortly after it became the main outlet. The crafts produced were wooden items, forged metalwork, and weaving.

On October 22, 1935, the homesteaders in Arthurdale chartered the Arthurdale Association, a non-share corporation and branch of the Mountaineer Craftsmen’s Cooperative Association operating in Scotts Run.  The association eventually took out loans for several cooperative ventures in Arthurdale including a store, farm, inn, a barber shop, industrial factory, service station, as well as a dairy and poultry operation.

All of these cooperative businesses lost money for the association. Historian Steven Haid stated that the cooperatives “were poorly conceived, poorly managed, and…poorly operated.”  Although financially unsuccessful, the cooperatives did provide employment to the homesteaders at a time when it was most needed as well as skills they used even after the craft industry stopped operations.