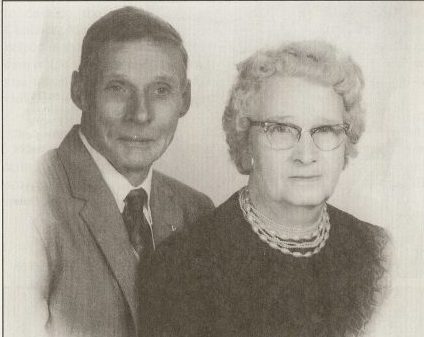 “My father, Okey Day, always wanted property to farm,” recalls Janet Day Cherry. Living in Morgantown was not his dream. When an uncle told him about Arthurdale, he applied for a homestead and the Day family moved into the community developed by Eleanor Roosevelt.

Okey and his wife, Dove, moved into the homestead at M-8 in 1935. They already had five children and two more, Janet and Roger, were born in Arthurdale. Janet was born in the homestead house and a neighbor, Mrs. Minnie Rhodes, delivered her. A maternal grandfather, Henry Hunt, moved in with the family after his wife’s passing. Everybody knew him as Pa Hunt. Janet and Roger have great memories of growing up in Arthurdale. They remember the big strawberry patch he had and picking strawberries with two cousins. “Our big fun each year was our Father’s Day reunion at our home,” says Roger. “Around fifty family members would be here all day, enjoying good food, playing softball and horseshoes, and having water fights.”

Okey and Dove prepared their children for hard work and successful lives. “Our dad was a coal miner for over 40 years and did a really good job farming his homestead to feed our family. We were fortunate to live in Arthurdale,” says Roger. Janet and Dorothy would help with the canning, storing produce from the farm in the root cellar for winter. “It was a wonderful childhood growing up in this community,” says Janet.

Both Janet and Roger now live in Arthurdale. Sadly, the other Day siblings have passed away. Allen was a railroad conductor and brakeman in Ohio. Robert retired from the Department of Energy and was an Arthurdale Boy Scout leader for many years. Gerald worked in construction. He and his wife lived in an apartment in the Arthurdale Administration Building and later moved to Morgantown. Dorothy lived in Masontown and married Richard Wolfe of the Wolfe Brothers Dairy Farm, which supplied milk to the local dairy industry. David had an optical business, lived in Colorado, and sang in the Denver Mile High Barbershop Quartet. Roger worked as a railroad engineer in Ohio for ten years, came back home, and retired from Jennmar in Reedsville. He is now an invaluable volunteer for Arthurdale Heritage. Janet worked in Morgantown and met John at WVU. Their careers took them to Arizona, Texas, Louisiana, Georgia, and Pennsylvania. They purchased the Day homestead in 1993 and retired to Arthurdale.

Recently, Janet and John Cherry donated to the Okey and Dove Day Family Legacy in support of Arthurdale Heritage. As a result, Okey and Dove’s photo was added to a commemorative sign in the Center Hall which honors families who have made gifts of $5,000 and above. The Day family feels blessed that Arthurdale Heritage is dedicated to this beautiful community started by Eleanor Roosevelt.