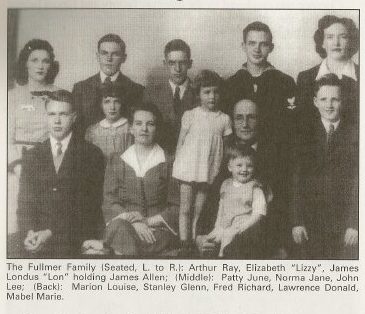 Raising a family of ten children is a challenge, and doing that during the Great Depression had to pose many difficulties.

The Fullmer family moved to Arthurdale in 1935 and lived in Q7.

Lon Fullmer was one of Arthurdale’s two blacksmiths.  He had learned the craft as a young man.  Also, Lon played the fiddle at many square dances when First Lady Eleanor Roosevelt visited.  In later years, Lon created the iron base for a reproduction armillary sphere, a late 1500s astronomical instrument, which is now on exhibit in the Smithsonian’s Air and Space Museum.

Elizabeth’s many skills learned while growing up on a Preston County farm allowed her to teach her neighbors how to can homegrown foods safely in the early days at Arthurdale.

Mabel, the second daughter, was a member of the Class of 1938.  President Franklin Roosevelt spoke from Arthurdale to a nationwide radio audience as part of the commencement program. Unfortunately, Mabel had a mastoid infection and stayed home.  The rest of the family attended the program, and John remembers shaking hands with the president after it ended. Before the day ended, Mabel and her family were surprised to see Mrs. Roosevelt deliver her diploma to the Fullmer home in person.

Many in the Fullmer family say that success came their way because of growing up in Arthurdale.  Jim was a vice president of Mylan Pharmaceuticals, Stanley worked at Kaiser Aluminum, Norma was a math teacher, John was a physician, Mabel was the executive secretary to the president of Drexel Furniture, Patty and Marion were homemakers, and Fred was a truck driver.  Lawrence served in the Navy in the South Pacific during World War II.  Arthur was a coal mine operator.