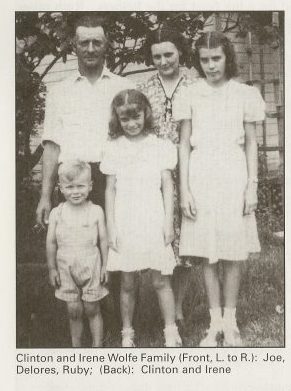 Clinton and Irene Wolfe were so happy to move into the F-6 homestead in 1934, along with the other 49 homestead families in the first group of Arthurdale settlers. Clinton had a steady job with the dairy co-op as its co-manager.  Later moving to F-14, they were able to feed the family with their garden, fruit trees and livestock.

Clinton grew up on a farm in the Aurora section of Preston County, and Irene was a Fairmont, Marion County, native.  They met in Scott’s Run when Clinton was working as a coal miner and had three children – Ruby, Delores and Joe.

“When I was a kid, my parents didn’t really talk about the Roosevelts or that Arthurdale was a federal project,” said Joe. “When I went to the 50th anniversary in 1984, I saw lots of things about it that I hadn’t known before. And it was a wonderful time because so many of the kids I knew growing up came back too.”

Celebrating the good life they had in Arthurdale, Clinton and Irene’s descendants have set up the Wolfe Family Legacy to support Arthurdale as a family.

“My career was with the federal government in the Maryland area near Washington, D.C., but my family and I came back to Arthurdale as much as we could to see our parents and stay in touch,” remembered Joe.

“While in high school, I really loved playing sports,” continued Joe. “I had the chance to play football, basketball and baseball on the Arthurdale teams. In my senior year, 1955, our basketball team won a sectional championship in the county, and that’s the only year that happened. And the trophy with our names on it is in the Arthurdale museum today.”

Now married to Maryann Davis, also an Arthurdale native, they attend the annual school reunions every time they can and help with Arthurdale events at other times of the year. “It’s always good to see people and reminisce,” Joe is proud to say.