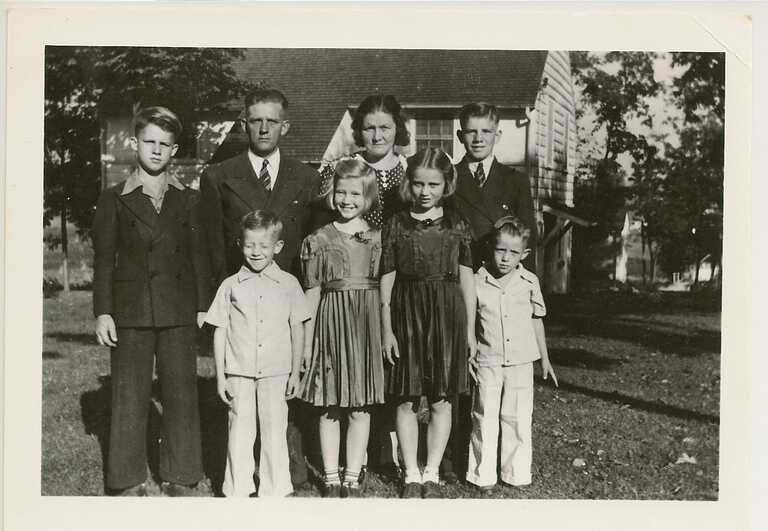 Jesse Winfield Weaver (1899-1974) and Elma Pyles Weaver (1908-1994) and their six children – Maynard, Manford, Lenora, Loraine, John and Roy Lee – were original Arthurdale homesteaders who lived in E-6, a Wagner home. “Arthurdale was a great community to grow up in. We were very lucky to be one of the few families chosen to live there,” said Loraine.

Originally from Borgman, Jesse and Elma brought their family to Arthurdale in the summer of 1935. Jesse was part of the building crew in Arthurdale, and he also worked at the factory building for some of the rotating industries. Jesse eventually settled as a coal miner, while Elma worked at the Ballard Aircraft Factory. Elma had her own car – something uncommon for the time and place – which she used to drive to work and chauffeur her friends and neighbors to and from town.

Jesse was a veteran, serving in World War I in Koblenz, Germany. He played coronet in the Army Band, and Arthurdale Heritage is fortunate to have his full World War I uniform and mess kit as part of our collection. After the war and working a few other jobs, Jesse became proprietor of the Arthurdale Esso Station until 1970 when he retired.

Maynard (1925-2005) was born in Birds Creek and moved to Arthurdale when he was ten years old. He followed his father’s footsteps and served in the US Navy during World War II, in doing so missing his high school graduation. After the War, he married Ruby Wolfe, worked for WVU, and eventually became the Arthurdale Postmaster. He was an active member of the Arthurdale Presbyterian Church, was a founder of the Arthurdale Tirekickers, and was actively involved in Arthurdale Heritage and restoring the buildings to their former glory. His son, Randall, was a previous president of Arthurdale Heritage and is still actively involved in the organization along with his wife, Lorraine.

Manford (1927-2017) was born in Howesville, WV and moved to Arthurdale with his family when he was eight years old. Manford married Vesta Mayfield and they had two children, Danny (deceased) and Sue Ann. As an adult, he settled in Harrisonburg, VA. Manford was a public school administrator for 40 years, and worked at Rockingham County Schools in Virginia for 25 years.

Lenora (1929-1975) was born in Howesville, WV and moved to Arthurdale with her family when she was six years old. She married Loy C. Kyle, Jr. They were the parents of four sons, Ronald, Roger, Gary (deceased) and Richard, and two daughters, Peggy and Kimberly. Her life was devoted to her family.

Rosalie Loraine (1930-2019) was born in Howesville, WV and moved to Arthurdale with her family when she was five years old. She was a devoted, loving mother, grandmother and great-grandmother who often spoke of the blessing of growing up in Arthurdale and spending time with the President and Mrs. Roosevelt. Rosalie married John Robert Wiles of North Huntingdon, PA. They had four daughters: Jeannie, Shawnea, Alisa and Terri.

John (1933-1995) was born in Howesville, WV and moved to Arthurdale with his family when he was only two years old. He was an Army veteran of the Korean War. John married Jean Eason and they had a son, Steven, and two daughters, Tracy and Lori. He was employed by Bethlehem Steel Corporation and then was the director of the Fraternity Management Association at Lehigh University in Pennsylvania.

Roy Lee (1935-2003) was born in Howesville, WV and was an infant when the family moved to Arthurdale. He served in the US Army for two years. Roy married Nancy Smith in 1953. They had two sons, Roy Lee, Jr. and Arthur, and two daughters, Tammy Jo and Roxane. Roy was an ironworker.

— written by Randy and Lorraine Weaver