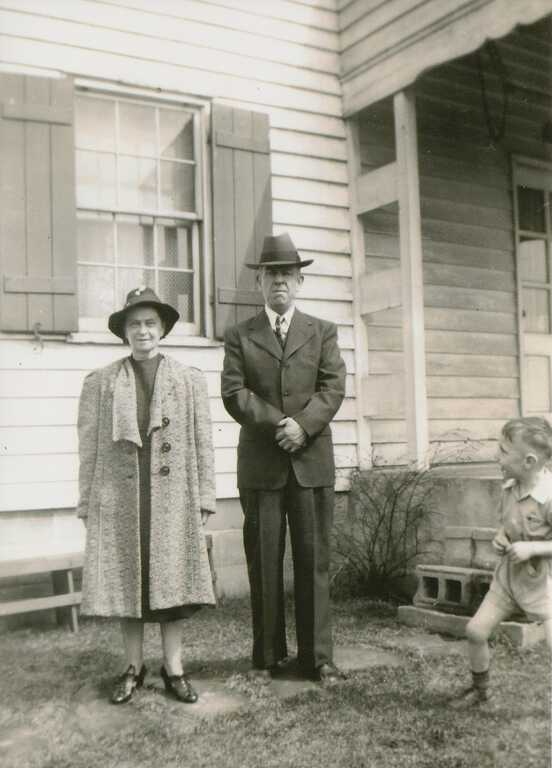 Harold and Grace Schultz outside their Arthurdale home

Originally from Greene County, Pennsylvania, Harold and Grace moved to the Morgantown area and began their family. After Harold’s job as a hotel manager ended during the Depression, the family was chosen for the Homestead Act community being developed in Arthurdale.

Harold became a cook for the homestead men living at the Arthur Mansion while constructing the new community’s homes. During this time, he and B. B. Luzier cooked for and interacted with President Franklin D. Roosevelt, Eleanor Roosevelt, and many other dignitaries coming to observe or consult on Arthurdale‘s progress.

After the men were able to move from the mansion into their families’ completed homes, Harold became a house painter in the area. Grace continued throughout her life to care for her children at home and served as a Sunday school teacher. Grace and Harold hosted Arthurdale faculty each year for evenings of games, homemade root beer and homegrown popcorn. They were proud all of their children graduated from Arthurdale High School.

Hester (Class of 1936) would later begin a career in nursing. She and her husband, David Morris, had three children: Marjorie, Donald, and David. They operated a dairy farm in Terra Alta before moving to Morgantown.

Charles (Class of 1940) enlisted in the U. S. Army on his 18th birthday. He served with the Army and Ohio National Guard in World War II as a chief warrant officer. The Shultz and Luzier homesteading families were joined in 1944 when Charles married June Luzier (Class of 1940), the girl next-door. They raised their children, Robert Marleen, Janet, Ronald, and Donald, in Akron, Ohio, where Charles retired as vice president of Bolin Oil Company.

Harry (Class of 1942) served with the Army Air Corps and Air Force Reserve, holding the rank of senior flight officer. His 43-year career included time operating a prop shop for the Flying Tigers in China during World War II. Harry and his wife, Harriet Zinn Shultz, lived in the Washington, D.C. area before relocating to Miami, Florida with their children, Hal, Hedy, and Harry.