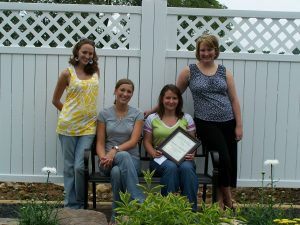 Pictured here inÂ the AHI newly constructed “Eleanor Roosevelt Memorial Garden” are (left) Jamie Davis-Bryan who made the presentation, Janna Davis, Haskiell, and Heather Rehe-Reckart.Â Â Haiskell is a WVU undergraduate majoring in political science.Â  She is the daughter of Ann and Scott Spiker and Dale Haskiell.

Tom Davis was the seventh child of original Arthurdale homesteaders, Frank and Annabel Davis.Â  His seven grandchildren started the scholarship in his memory after his death in 2007.Â Â Â  In addition to the above listed granddaughters, his other grandchildren are Brittany Rehe, Ben Davis, J.T. Davis, and David Rehe.

Each year they plan to give a scholarship to a Valley district resident who plansÂ to attend or is already attending a West VirginiaÂ college or university.

If you or anyone you know would like to send donations to the scholarship fund, please mail them to: