We at AHI like to highlight some of the artifacts that are on display in the museum that don’t often get discussed in depth on our guided tours. These two objects were generously donated by Beverly Slagle in 2018 and both hold a special place in our World War II room. They are mementos from the Army-Navy Production award ceremony held at Arthurdale on May 18, 1945  to celebrate the war effort at home. Army-Navy “E” Awards were given out to honor the men and women whose “Excellence” in war production surpassed other manufacturers.

Only 5% of the 85,000 companies working to produce war goods were given this prestigious award, one of which was Arthurdale’s Silman Manufacturing Co. At Silman, personal radios, target kites, and wooden trainer airplanes were the majority of war products constructed. Bertha Zuccari, whose certificate and booklet these were, was a war-time Rosie the Riveter (and grandmother to Bev) who aided in manufacturing valuable pieces of equipment for the Allied soldiers overseas. If you’d like to leaf through the award ceremony booklet, click the image below. 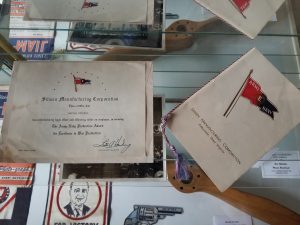